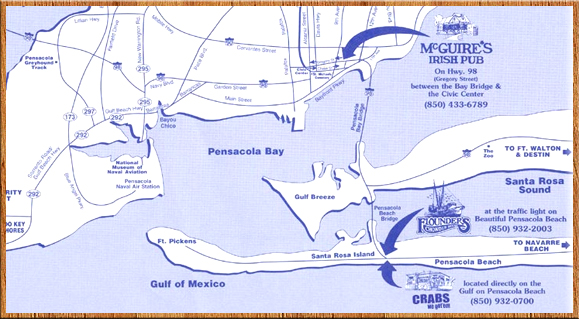 As you approach the building, you will surely noticed the M/V FLOUNDER…55’ length, 6’ draft, and 20’ beam, 30 tons net weight; built by D. C. Beaux Shipbuilders, Meraux, Louisiana and commissioned in Bayou La Batre, Alabama in 1946. Captain Frank Flounder and later his sons, Fred, Floyd and Felix, shrimped this vessel from Key West, Florida to Tampico, Mexico thru calm seas, tropical storms and fierce hurricanes until she was retired in 1998. This grand old shrimp boat is complete with nets, sleds, mast and rigging and is ready to go back to sea at anytime.The Marlin Bar showcases the huge 980lb, blue marlin, a USGFA World Record catch by Warren Culbertson, a noted Gulf Coast Angler. Atop Flounder’s stage you’ll find a true Pensacola icon, the original sailfish sign that lit the way to Santa Rosa Island since the 50’s. Not far from our Shrimp Boat sets another piece of local history, the Man Eating Giant Clam. This shell was displaced outside of the Allen Davis Shell Shop in Gulf Breeze from 1948-2004, when the store closed to make way for the Publix Shopping Center. Flounder’s promises you a uniquely interesting and warm atmosphere with excellent Food and Drinks prepared and served by friendly employees who Give a Damn!!There’s always a lot of fun people and things to do at Flounder’s Chowder House. Major Credit Cards Accepted, ATM on Premises.

Be sure to check out our sister seminar series “Emerald Coast Saltwater Seminar Series” held each month at Northlight Marina in Niceville.